Growing up, I often heard adults discussing the ‘iron curtain’. I confess that for many years, I had no idea what that really meant. The term brought to my mind the riveted hull of a massive ship-the Titanic, for instance-with victims trapped inside.

I had the opportunity recently to visit the Grenzdenkmal (Border Memorial) in the town of Hötensleben, Saxony-Anhalt, in which a section of the actual East/West border has been preserved as an outdoor museum and memorial.

No less intimidating than the wall that once encircled West Berlin, the border wall was, nevertheless, shorter than I expected it to be. This was an opinion shared by the other American in my group. True, it was topped by very nasty looking barbed wire, but the height of it was not much more than the average privacy fence in any American suburb.

However, as another of my traveling companions-this one a former East German citizen-was quick to point out, the wall itself was neither the first nor the last obstacle to overcome if one wished to leave the country.

The very first obstacle, he informed us, was a policy that prohibited most East German citizens from traveling anywhere near the border region in the first place. Only those citizens who had proven themselves loyal-even fanatical-to the ruling party could gain access to that area. That being the case, the average East German citizen, my traveling companion included, never even saw the border wall until it came down in November 1989.

For those few who did manage to  see and then to surmount the first wall, the next barrier was an expanse of mowed lawn, monitored from observation towers by armed guards. Banks of floodlights made escape attempts equally fatal by day or night. Beyond the grass, a carefully combed sand bed was used to detect tracks, which would then send soldiers in vehicles racing down a concrete path to intercept the would-be escapee.

Should one of those same guards decide to use his vehicle to bust through the wall in his own bid for freedom (as a few were tempted to do), steel beams were cut into sections and stacked into barriers known as “dragon’s teeth” along of the outermost wall. 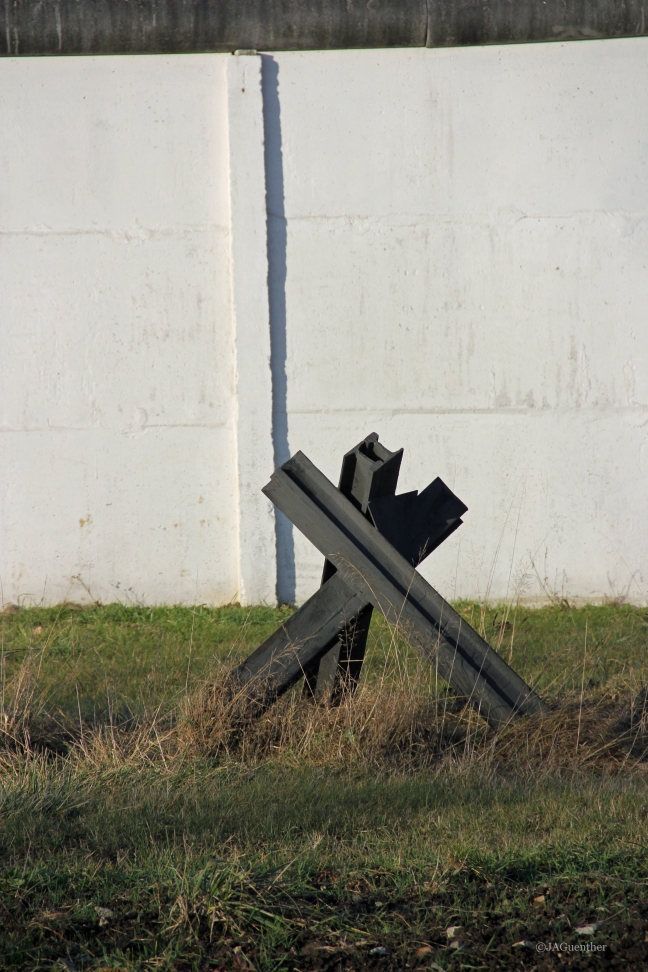 The dragon’s teeth were tested to stop even the sturdiest tank and spaced closely enough to trap even the smallest passenger car.

In areas where geography made watch towers and flat fields impractical, trenches, attack dogs, and land mines were employed instead.

If, by some miracle, the would-be escapee did manage to get through all those barriers and past the last concrete wall, he would still have found himself about eighty meters from the actual East/West border, and well within firing range of the guards.

Visiting Hötensleben brought the reality of the iron curtain home to me in a way that news reports and history lessons never had before. It has always been my plan to end the Born von Burlau series with the reunification of Germany and the fall of that wall. I look forward to writing it now more than ever.